Standing up to Monsanto: Chipotle 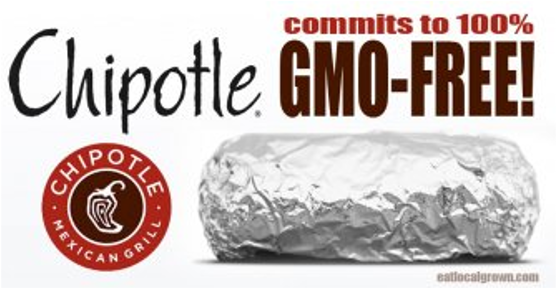 “With voters in Colorado and Oregon set to decide measures requiring clear labels on food that contains genetically modified ingredients, Chipotle, the Denver-based fast-food chain, is urging residents to approve the initiatives that Monsanto, Kraft, and Pepsico have spent millions to defeat.

‘Fundamentally, we believe that people have a right to know what’s in the food they eat,’ Chipotle chairman and co-CEO Steve Ells said Tuesday in a statement, Denver Westward reported. ‘Consumers want this information, and we are already giving it to them. But well-funded opposition groups continue to fight labeling efforts, with opponents putting their own profits ahead of consumer preferences.'”

This entry was posted in GMOs, News, Nutrition, Stuff We Dig and tagged chipotle, Monsanto, non-GMO. Bookmark the permalink.